SYRACUSE, N.Y. — The wild chestnuts around this leafy college town used to grow in such great numbers that locals collected the nuts by the bushel and shipped them off to New York City for a small fortune.

These days, though, it can be hard to find a single tree thanks to a devastating blight imported from Asia in the late 1800s.

“Every fall, I look for the burs,” said Neil Patterson of the Tuscarora Nation, a Native American tribe that has lived in the region for centuries. His ancestors depended on the trees for food and medicine. But in 10 years of searching, he’s never found the spiny pods that hold the chestnut’s prized fruit.

Soon, scientists at the SUNY College of Environmental Science and Forestry here could change that. They say they’ve found a way to resurrect the chestnut by giving it a gene from wheat that shields it from the blight’s poison. If the federal government gives its blessing, these genetically engineered trees could be ready to plant in a few short years.

It would mark the first use of the technology for ecological restoration, and probably not the last.

These are issues the Tuscarora and the five other nations of the Haudenosaunee Confederacy are grappling with as they confront the prospect of the GE chestnut. Some see the tree as a way to restore an important piece of the ecosystem and their culture. Others question whether an engineered tree can do either, said Patterson, the assistant director of the Center for Native Peoples and the Environment at SUNY ESF.

“We just don’t know about this next version 2.0 of chestnuts,” he said.

Once upon a time, American chestnuts (Castanea dentata) spread their leafy boughs from Maine to Mississippi, accounting for a quarter of the trees in some forests. More than 100 feet tall and 10 feet around, they earned the nickname “Redwood of the East.”

For thousands of years, Haudenosaunee people collected the fallen nuts and mashed them into a rich paste, or dried them and ground them into flour. They used the sawtoothed leaves as medicine. Chestnuts are even mentioned in many versions of Haudenosaunee creation stories, Patterson said.

The fungus that did the trees in was discovered in 1904, having hitched a ride across the Pacific on imported Japanese chestnuts. Within a few decades, the deadly blight felled nearly 4 billion trees.

Aside for a few aging relics, all that’s left are slender saplings and unruly shrubs that sprouted from the seeds of other sickly chestnuts. They, too, will eventually fall victim to the blight’s cankers, which kill the trunk and strangle everything above it.

Other trees have met similar fates. A beetle-borne fungus has claimed millions of North America’s elms since its arrival in 1928. Sudden Oak Death began to kill trees on the west coast in the 1990s, and the emerald ash borer began decimating its eponymous host throughout the east in the 2000s. 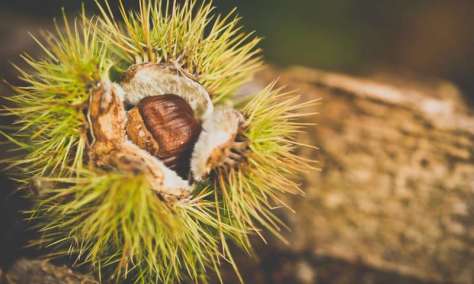 Losing a tree species rips a hole in an ecosystem. Researchers say the chestnut’s disappearance changed fundamental forest processes, like the way nutrients cycle through the soil. Its absence made room for competitors like hemlock, and it deprived bears, rodents and birds of a staple food source. At least 5 species of insects went extinct.

For the Haudenosaunee, the tree’s demise was just one source of upheaval. The nations had already lost much of their ancestral land, and their children were now being forced to attend boarding schools where they were prohibited from speaking their languages. Knowledge of the chestnut – and so many other things – was lost.

“There’s not many people left who would have remembered eating them as part of their diet or culture,” Patterson said.

By the early 20th century, Haudenosaunee people were fighting for survival.

Not unlike the chestnut.

The impetus to resurrect the tree came from a group of chestnut enthusiasts — of European descent — who saw it as an important piece of U.S. heritage. They formed The American Chestnut Foundation in 1983.

For decades, the foundation poured resources into a program to breed blight-resistance genes from the Chinese chestnut into American trees. But progress has been slower than anticipated.

“We’re perhaps a little bit less than halfway there,” said Steiner, the senior science advisor to the foundation’s board.

Meanwhile, the foundation’s New York chapter supported a parallel effort to develop a genetically modified chestnut. It turned to scientists at SUNY ESF, including Bill Powell, a plant biotechnologist who has studied chestnuts for most of his career. (He keeps old photos of the majestic trees in his office, and his license plate says CASTANEA.)

It took 16 years for Powell and his colleague Charles Maynard to create a blight-tolerant tree using a gene found in wheat and many other plants. The gene causes the chestnut to produce oxalate oxidase, an enzyme that detoxifies the blight’s acid.

It’s an elegant solution, Powell said. The enzyme doesn’t kill the fungus, so it’s less likely that the blight will evolve ways to defeat it. And unlike the crossbred trees, the genetically engineered ones preserve nearly all of the native chestnut’s genome.

“To me, this is really the answer,” he said.

The chestnuts are born in Powell’s labs, where a veritable forest of miniature trees grow inside clear plastic containers stacked on metal shelves. A few graduate to carefully controlled field sites where they can stretch their limbs and mature.

Every year, Powell and his staff cut or bag every flower to keep the pollen from spreading. That’s to comply with federal regulations, and because they need the pollen for breeding.

To restore the species, scientists must introduce the blight-fighting gene into wild trees from across the chestnut’s range _ a project Steiner says will take decades.

But he thinks it’s important to try to fix our mistakes.

“Otherwise, you’re just hiding your head in the sand.”

But is it a problem science should try to solve?

A report from the National Academies of Sciences, Engineering and Medicine flagged the social and philosophical issues at stake. Among them: Would genetically modified trees degrade the wildness of natural ecosystems, or would they bolster it by preserving species that we would otherwise drive to extinction? And who stands to benefit _ or be harmed _ by their release?

“These are essentially some uncharted waters for us,” said Jeanne Romero-Severson, a quantitative geneticist at the University of Notre Dame who worked on the report. (She also serves on TACF’s board.)

Haudenosaunee people are wrestling with these questions now. Some think the tree’s return could restore an important traditional food source, and they don’t mind using genetic engineering to do it.

Brian Patterson, a member of the Oneida Nation Bear Clan (and no relation to Neil), likened it to the way Haudenosaunee people traded arrows for guns and clay pots for cast-iron pans.

“We’ve always adapted,” he said. “We’ve always been able to embrace these impacts to our ways of life to our benefit.”

Some have doubts about the technology but say it might be worth using if the chestnut tree could be planted widely. Then “it would matter to the environment,” said Curtis Waterman, a member of the Onondaga Nation who recently retired from the Haudenosaunee Environmental Task Force.

Others say genetic engineering conflicts with their Original Instructions, handed down from the Creator, to let nature take its course.

“It has no use or purpose in our way of thinking or our way of life,” said David Arquette, a faithkeeper for the Mohawk Nation and director of the task force.

And some are wary of the technology’s long-term consequences.

“You don’t know what it’s going to do to the whole food chain,” said Sid Hill, the Tadodaho, or spiritual leader, of the Haudenosaunee Confederacy. “I’m afraid of the domino effect.”

Powell’s group is trying to get answers. His team has studied whether the pollen is safe for bees (it is) and whether the leaf litter harms native frogs (they seem to thrive on it).

He’s confident there won’t be issues. “Even if problems come up, there’s always a solution,” he said.

But for many Haudenosaunee people, the worries run deeper _ to our broken relationship with nature.

In the case of the chestnut, “we’re trying to correct our wrong with another wrong,” said Lisa Maybee, director of the Department of Environmental Protection for the Seneca Nation. “Where do we learn from this?”

In a few months, Powell and his team will seek government review of the GE chestnut so it can be planted in the wild. (They don’t intend to patent the tree.)

Agency officials will examine the scientists’ studies and conduct a risk assessment. However, the process doesn’t leave much room for discussions of values and the concerns of impacted communities, said Andy Newhouse, a graduate student in Powell’s lab.

“Scientific data isn’t the only thing that goes into making a decision,” he said.

Many Haudenosaunee people suspect the tree’s destiny lies outside their control, Patterson said. But that hasn’t stopped him from trying to keep the Nations in the loop.

“I just didn’t want my kids saying, ‘Why didn’t you stop it when you had the chance?’” he said.

Patterson said he is morally opposed to the GE chestnut, but open to learning more about it. At the same time, he feels nostalgic for the chestnut forests he never knew.

A few years ago, Patterson invited Powell to talk with tribal leaders. Powell handed out nuts from wild trees that had been collected by the chestnut foundation. It was the first time Patterson and many others had seen one.

“I put it in the microwave and ate it,” he said. “It’s probably one of the best nuts I ever tasted.”

This is one of the questions we consider in STOCKSCH 100 – Botany for Gardeners, taught online each winter and summer term at UMass Amherst.  See: https://onlinesustfoodfarm.com/botany-for-gardeners/