BY JAMES REBANKS AUGUST 5, 2021 in TIME. Rebanks runs a family-owned farm in the Lake District in northern England.

For much of my early life America meant progress, the bright shining farming future.

I was a kid on an old-fashioned farm in the North of England, and we were way off the pace of change. We had tractors and small machinery, of course, but horse tack still hung from the beams in the barn, gathering dust, and all of my grandfather’s stories were about working horses. Ours was a mixed farm of different animals and crops, the kind of farm that existed everywhere until a few decades ago. It was all crooked little fields, no two looking the same, and every kind of farm animal and crop that would grow on it, all swirling round in a dance of rotation that only my grandfather seemed to understand.

My uncle and auntie farmed dairy cows a few miles away from us on better ground, and they were way more modern and way bigger than we were. A big, by the standards of then, specialised British dairy farm. They would take holidays to America and Canada and come back raving about the size, speed and power of the tractors and the amazing productivity of the dairy cows. They were some of the early importers of North American Holstein genetics—that revolutionised British dairy farming and doubled yields since the 1990s. They also brought back baseball caps and Hersey bars. It all seemed very cool.

To see the future of farming, and perhaps of life in general, we looked to America. Landscapes of giant perfect weedless fields, with the work done with giant new tractors and other machines. Farming we’d probably only ever dreamt of, with all the ancient field battles won. It seemed to me that was the future, and we were getting to it way too late.

The buzzwords were “efficiency” and “productivity” and the means were specialisation in to one or two crops, or one kind of livestock, and to get bigger for economies of scale. Fields getting bigger meant getting all the old hedges and walls out of our landscapes to create a scale it had never had. Scaling up cattle meant giant steel and concrete sheds and making silage with artificial fertiliser instead of hay from barn muck in the old system. Scaling up sheep meant keeping more and feeding them in winter on bought in concentrate feeds. And we had to strip away all the other stuff that just couldn’t compete anymore, the turkeys to sell at Christmas, the pigs in the sties, the small milk herds, and all those old cute craft skills like hedge-laying, or growing our own vegetables or harvesting fruit from the hedgerows. Through my twenties and thirties that old world stuff vanished, and we binned it in our memories as nostalgia. We hardened our hearts to them killing off a lot of things we knew and loved because it was progress and the future, and who could fight that?

For many years we accepted the inevitability of this American future as if it was a fact of life, handed down by God.

But there was a nagging voice in our heads that said something was wrong. Something about all this change didn’t make sense. My dad came home from the pub and told me that the most old-fashioned farmer in the district had died. He was called Henry and did everything the old ways, so much so that we tended to laugh at him a little. But when a neighbour took over his land and had the soil tested, to find out what nutrients it needed, he found that it didn’t need any. Henry’s was the best soil in the district. The more modern and industrial the farmers we knew the worse their soil was. And the birds began to vanish, and the insects, and the wildflowers. And surely someone somewhere had thought this all through?

After a while we began to realise that no one was thinking this all through. And the costs and negatives kept getting worse— the changes created debt ridden farms, the costs of the things we sold were driven down and down, the animals seemed to live worse lives in the giant barns, with milk cows ceasing to graze in fields. The ecologists now said farming was a disaster and was wrecking our landscapes—even common bird species in the fields of my childhood were starting to vanish by the time I was thirty. My dad grew suspicious of it all, he worked on other farms and he was depressed at how the staff were treated, and how neglected and broken down the farms were becoming. The old ways of caring for the land and animals were dying, replaced with a kid of industrial callousness. And it was confusing, how could the future be worse in all these ways? 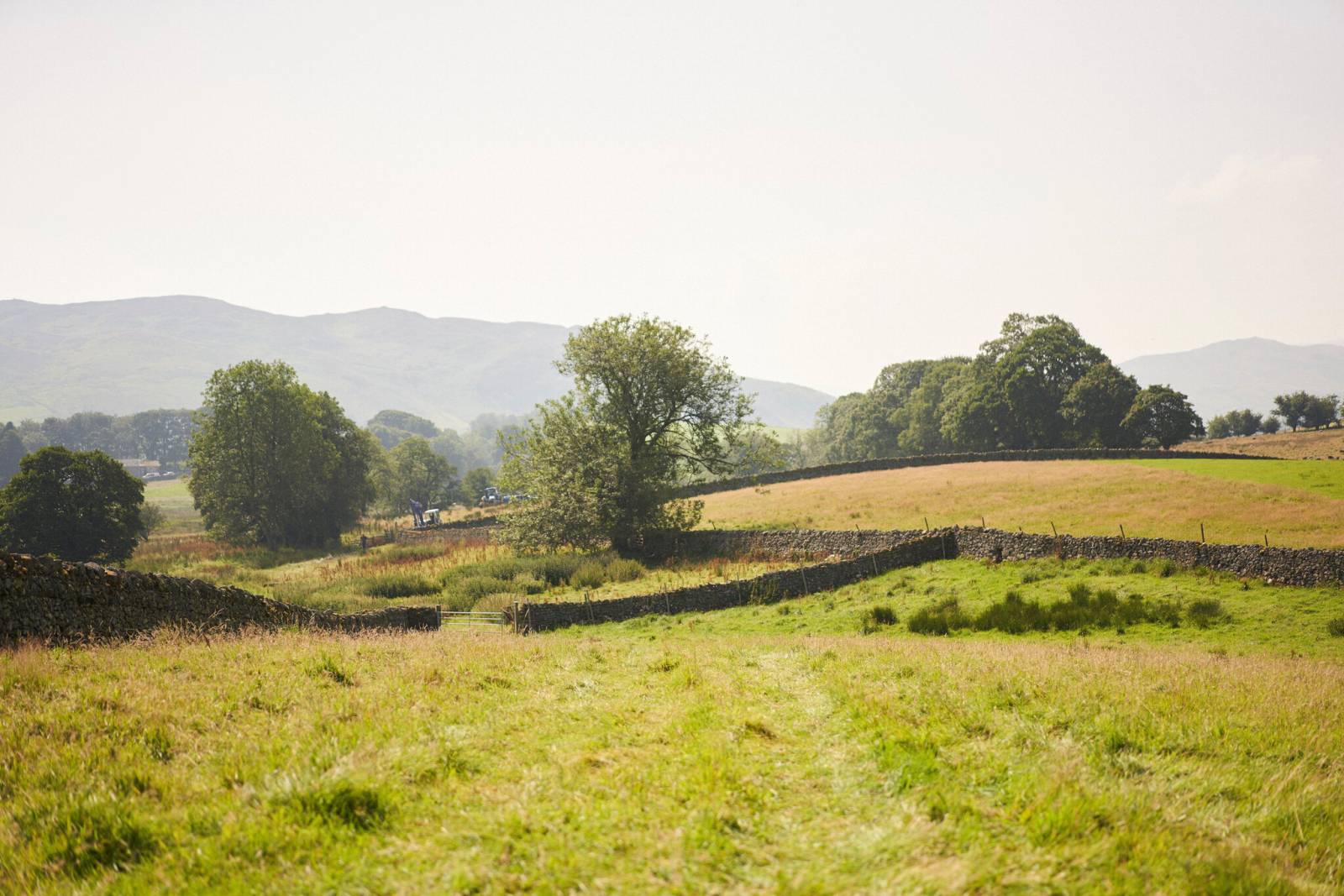 A view of James Rebanks’ farm in the English countryside

Somewhere along the way the reality hit us, and we knew that we were part of a disaster. Yes, the new farming worked for supermarkets and created aisles of cheap food, but did it work for people?
Did it work for soil?
Did it work for nature?
Did it feed people healthy real food?

The answer to all these questions was a clear NO.

It became clear that we were fellow travellers on an American journey to create a cheap food and industrialised farming system. And the end result was disastrous. The evidence of this disaster has grown with every passing year and is now overwhelming. I’ve visited the American Mid-West in the last five years. It is still a journey into the future for me, but not a good future, more a dystopia. I met some amazing farming people in the Midwest, good family people that cared about their communities and were trying their best. Some were bravely trying to change their farming against the odds, and in the face of a system that discourages anything but commodity production. Others were simply holding on in the current systems, struggling to hold on to their land and their connection to it, in a system that doesn’t give a damn for them. The evidence of what this farming and food system does it devastating—to soil, the watersheds, to the oceans, to public health and to native habitats and native flora and fauna. Modern farming turned fields in to factories, and we seem surprised that our fields are now sterile and dead of everything but corn and soy. Turns out farming has to be more than just another business, pursuing profit, we need to it juggle a heap of complex ecological and social demands. The way we think about farming just doesn’t work.

But there is a risk that we swing too far the other way, to blame all of this on America, and to see nothing but harm in American farming. That isn’t the whole truth, or nearly fair, the rest of us copied America willingly, and played our own roles in this unfolding disaster. Yes, we no longer look mindlessly to America for our food and farming future, but it is also important to note that American farming is not all the same, or just one thing.

In the past decade or so a new wave of farming radicals has come to prominence in America championing and developing what has become known as regenerative agriculture. This movement is not always clearly defined or articulated, because it is necessarily different in different places, and we are just working it out, but at its best regenerative agriculture is about building healthy soils by working out how nature did that, and recreating the biodiversity that should be in our farmed landscapes. I have learnt a great deal from this new wave of American farmers. Social media has become a massive learning tool in agriculture—and farmers like Gabe Brown, Joel Salatin, Justin Rhodes, and Greg Judy have vast followings in the U.K. This movement is all about identifying the harm done by post-war agriculture, ending those practices, and replacing them with new (or revived old) practices that can mend soil, and produce food in restored ecosystems.

It turns out that nature can’t be beaten, not as we thought for decades after World War Two. Rachel Carson was right, you can only beat her for a while with brute or chemical force, then she adapts and mutates and works out how to beat your tricks. Blackgrass and other weeds are now resistant to pesticides and herbicides. Antibiotics are ceasing to work on livestock (and us) because we have squandered them through over- and unwise-use. Agricultural soils are in a terrible state because we have repeatedly ploughed and failed to rotate crops and rest land, to feed soil microbiology.

The future has to be working with nature. Learning from nature, and from older farming cultures that knew this, and which evolved methods that didn’t require fossil fuel cheats. And we all need farming to be sustainable and ideally regenerative, because if it isn’t your kids and mine, or their kids or grandkids are going to live to see collapse and hunger.

My new book Pastoral Song is ultimately a book about hope and optimism, because that is what I feel. Yes, we have screwed a lot up, and yes, the screwing up has to understood and stopped, but we can also mend the mess we have made, and we need farmers to do that. The regenerative farming revolution gives me hope that we can find ways to produce great healthy nutrient dense food, recreate local food systems, feed everyone, including the poorest people in our societies, and look after the soil and the ecosystems we exist in.

On our farm we’ve begun turning it around, and have planted 25,000 trees, and restored the old hedges, and created ponds and wetlands, and through doing that have found a new love of this place and a new idea of how we must care for it. I am still a shepherd, and proud of it, but I now look to our soil, and our wildflowers, and the insects and birds around us, as other measures of our stewardship. And whilst I am a harsh critic of America for exporting the mindset and tools that created this mess, but I am also an admirer of the best American farmers. When I want to learn how to rebuild the soil on my farm I tune in to Greg Judy from Missouri. I see those hundreds of fine red cattle being moved twice daily through those fields rich in flowers and insects and birds and hear him waxing lyrical about how he has mended his soil.

American farming may be a little less shiny and perfect, in my mind, now than when I was twenty, but she still has a powerful role to play in us navigating to the future. I think the future is emerging from the wreckage of that post war American farming system. We just need to be big enough to admit the old flaws and see the good stuff emerging, and get our hands dirty doing it, and our wallets out to pay for it.